In many ways, the birth of First Presbyterian Church begins with the promise of a husband to his new wife. In the 1840s, Jacob Yost, a Congressman from Pottstown met a young widow from New York who was a staunch Presbyterian. Shortly after Jacob and Mary Ann Yost were married, he expressed his desire to give up his seat and return to Pottstown. His wife had one major reservation: “I don’t see how I can live in a town that lacks a Presbyterian church.” As a result, First Presbyterian Church was born on May 9, 1848 with ten charter members, including Jacob and Mary Ann Yost.

At first, the Presbyterians met for worship at a Methodist church in town. But by 1853, First Presbyterian Church was ready to dedicate its first sanctuary and building at High and Evans streets in downtown Pottstown. President James Buchanan, a Presbyterian and friend of Mr. Yost, contributed to the first building campaign. By 1887, there were 160 members, as Pottstown grew in population, and in 1889 the church dedicated a new building to replace the original one. 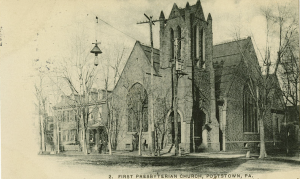 Then in 1955, facing a shortage of building and parking lot space, the church voted after much study and debate to move to the north end of the town. With a gift of land from a church member and the purchase of an adjoining lot, the church had nearly four acres on which to build. On September 23, 1962, the cornerstone was laid, and on June 2, 1963, the new church was dedicated.

First Presbyterian has always sought new ways to reach out to the community in the midst of the changing times. On September 19, 1966, the church opened its doors to seventeen three and four year-old children in its brand new weekday nursery school. The “HENS” preschool continues to be an important part of the church’s ministry. In 1971, First Presbyterian was one of the Pottstown churches instrumental in forming what would become the “Cluster Outreach Center” to provide a hand-up to impoverished Pottstown residents. In recent years, the church has begun hosting Community Meals once a week, helped to start a “Habitat for Humanity” chapter, begun a tutoring and mentoring program at Barth Elementary School, started sending teams of youth and adult advisors on summer workcamps, adult mission teams to rebuild in the wake of national disasters, and sent teams to Honduras to provide clean water for villages with impaired water sources.

By the grace of God, First Presbyterian Church has persevered in the faith through times of prosperity and times of peril. Today we are strengthened by a past that we honor and cherish, but we live towards the future God has in mind for us. We are eager to see what God will do next in and through us!

The following records were digitized in their entirety, with the exception of blank or missing pages, and their integrity was maintained by digitizing in the exact order in which they were found.

Notes on the Building of FPC on North Evans Street